Write What You Love 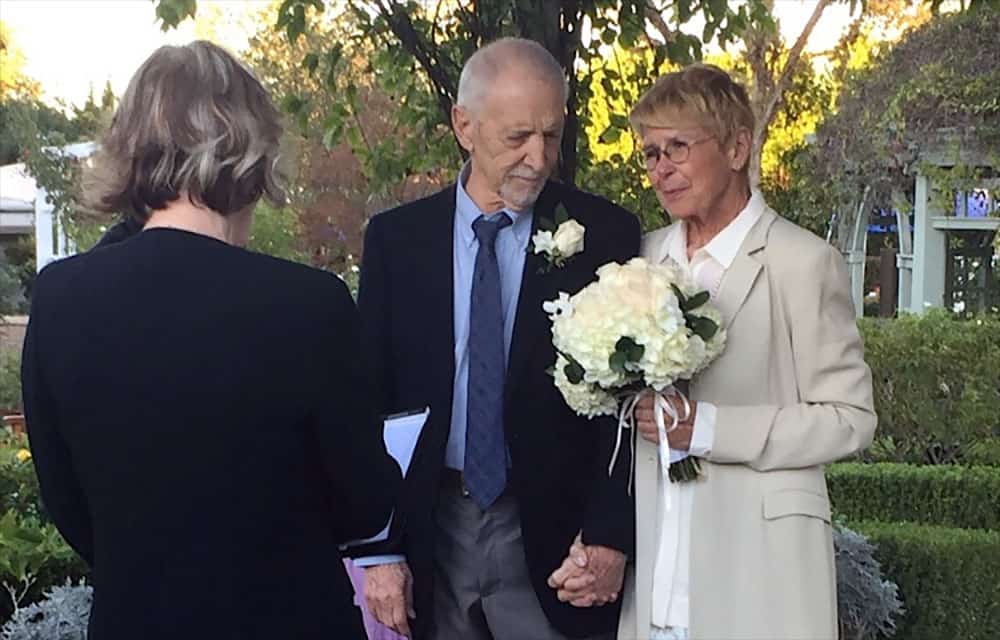 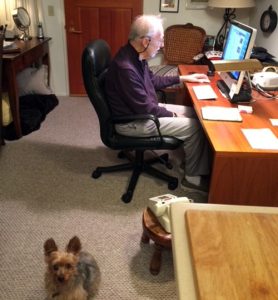 Tony Lawrence at work with Dexter

“Whatever creativity is fueling you, this is what it should be about – satisfying the creative urge of people on campus.”  That’s how writer Tony Lawrence describes his experiences with MPTF Studios, the in-house production studio that encourages their residents’ imaginations to run wild.  A new project has pushed them in a bold new direction: Black Fire, a novel written by Tony that he decided to turn into an audiobook split into podcast episodes.  It turned out to be quite the endeavor here with his wife, Madi Smith (whom he met and married on campus in the Roddy McDowall Rose Garden), serving as Producer/Director, MPTF’s Jennifer Clymer as Executive Producer, and Marcus Murrietta as Creative Sound Engineer.

Tony was a writer of series like The Outer Limits and The Twilight Zone; Marcus and Madi spent over a year in the studio booth starting in 2018 as Tony narrated the entire novel, which Marcus describes as “a romance 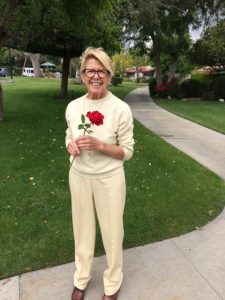 sci-fi fantasy novel that spans time and space, featuring a casino where experiential betting weaves a tangled web to its patrons.”  Almost 90 when he came up with the project, Tony is justifiably happy with the final results – a rare achievement at any age, and a proof of how much creativity can flourish at any point in your life.  Tony says he first got the idea years ago reading the book “Future Shock” by Alvin Toffler, who predicted the rise of casinos based on wagers of anything but money, a concept he decided to use as “a chance to do something free of all the taboos and time limits.”

As Executive Producer, Jen shepherded the project scheduling the audio booth for peak times so that Tony’s voice would be at his best.  Marcus got to bring his passion for sound recording and design into play here for the entire project; as he explains, “Because of the time it took to do it, I could tell how we needed to record and mix throughout, or just simple things like where we placed the mic.  For the first few sessions we just wanted to get a lot done but Tony’s voice would get fatigued, so as we learned to work together we wouldn’t do sessions quite as long, just in the mornings when his voice was freshest.”  When he heard the final results, Tony says, “It was a great experience for me to hear my own words come to life the way I saw it originally.  I wasn’t sure I could pull it off.”

Black Fire is the latest chapter in the history Tony and Madi have with MPTF.  Originally Tony moved here to be with his first wife, and after she passed away, he found the environment here so rewarding he decided to stay.  Then, sometime later, he met Madi, a love story right here on campus that became an unforgettable part of our Reel Stories, Real Lives in 2016.  Madi’s three-legged dog, Dexter, whom she could be seen pushing a stroller around the campus, inspired a short film they made together with Jen and Marcus, Three-Legged Stool.  When he started working on Black Fire, Tony shared a few chapters with the campus’ Grey Quill Society, a writing 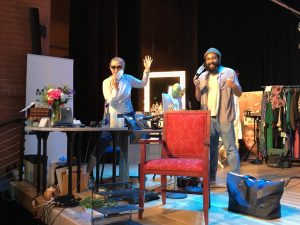 group, but realized it was turning into a much longer work.  The process of transforming it into an audiobook was instructive for Marcus, who said he “got to play around with doing clean-up like removing breaths, and some funny moments as well.  This was the first time I ever recorded with a dog in the sound booth; Dexter would be in there and occasionally you’d hear a little yip I had to take out.”

“I loved it because I watched him write this,” Madi recalls.  “He’d write at night, and I’d read it in the morning and give feedback.  I saw his writing process with Three-Legged Stool, and since I’ve worked with comedy writers including Norman Lear, it was a different experience than with a dramatic writer.  To me, Tony is the most brilliant creator.  Not because I’m married to him – I’ll tell him when something isn’t working, which is very rare.  It’s amazing that all of this comes out of his brain!  No outline, no cards like most writers do.  It just was a stream of brilliance onto the page, and it just blew me away.”

The whole experience was rewarding for all involved, as it proved how flexible and dynamic the concept of MPTF Studios really is.  “This place gives us a chance to express ourselves in ways that nobody else would even think of,” Tony says, to which Madi adds, “MPTF Studios keeps your lifeblood going…MPTF lets you share yourself, to get it out there and be creative.”  When the studio began twenty years ago thanks to Mel Shavelson, it set into motion an evolution of creative expression that we can still see today with Black Fire and the daily work of Creative Chaos’ live programming keeping his mission alive.  The head of MPTF Studios, Jen feels that during the pandemic that drive is the same even if it looks different at the moment with residents giving their all via Zoom or appearances in the theater including “Phil Gittelman, Bob Mirisch, Harry Northup…When we shut down the campus, the families could still be interacting over Zoom and Creative Chaos.  We will always be fluid and pliable to be supportive in whatever creative ventures people like Tony and Madi bring to MPTF Studios.”

And yes, Tony’s at work now on a new novel.  Enjoy the full podcast here: 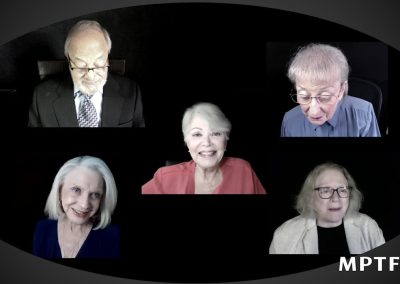 MPTF residents join forces to perform a new radio rendition of All About Eve.

When you are a part of our family, you’re not alone. 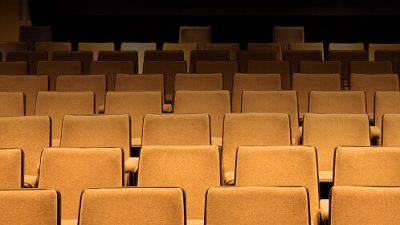